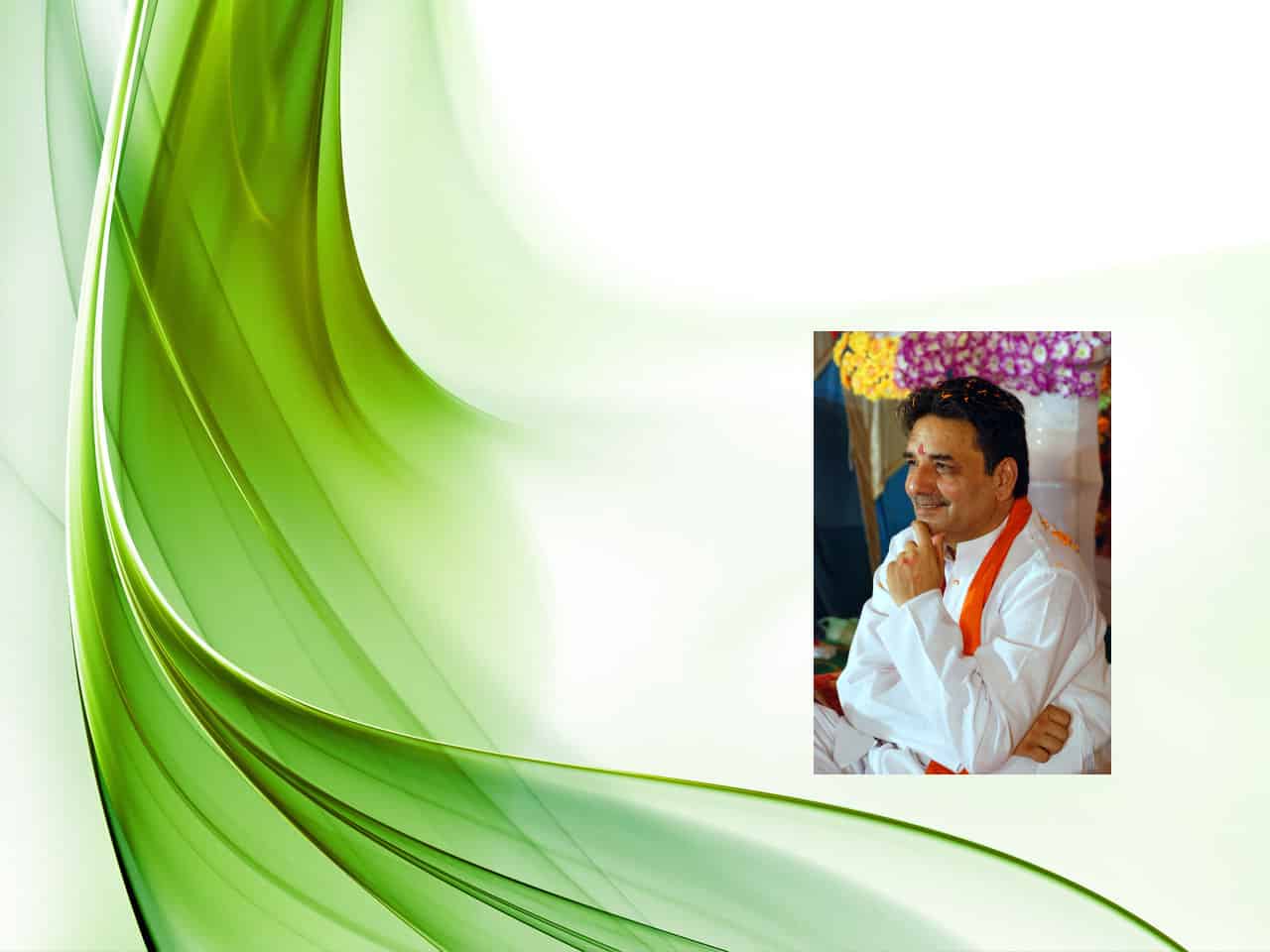 The Highest Pinnacle of Sadhana

With the Nikhil Flag in Hand,

Guru provides the divine nectar Shaktipaat boon to His disciple at the onset of the new year. The Samraatabhishek is the divine joyous elixir of life, it is the immortality nectar.

Gurudev granted Rajyabhishek Diksha to disciples on December 29, 2013. It was the ultimate fortunate moment for all of us. Even a thousand pages will be insufficient, if I start to write about the divine experiences of Sadhaks after that Diksha.

Gurudev stated in His immortal words – “Everyone survives in this life, but one does not get honour and respect, everyone does not become the centre of attraction.

The Rajyabhishek is culmination of Asceticism in Domesticity and Domesticity within Asceticism. We may choose to live in any of these two states, but we should live with full joy and rejoice. We should be able to achieve, whatever desires or wishes we have. “

Gurudev granted us Rajyabhishek Diksha initiation and this power permeated into each atom of our body.

As the next step in this series, Gurudev motivated the disciples on 28 December 2014 to offer Actions-Karma in the sacrificial fire of life. He initiated a unique Ashwamedha Yagya process within the life of disciples, and this process culminated within the Ashwamedha Viraat Diksha. A life full of struggles is inevitable, and it is essential for the Sadhak to obtain victory over those struggles.

Gurudev stated – “It is important to become strong at the time of struggle, but who can provide you this strength? Thousands will accompany you during success; your friends, relatives and family-members claim their hands during your success; but only one solitary power accompanies you during the struggle stage. This solitary power is the Divine power, and Guru is the manifestation of this Divine power.”

This was the basic essence of the Ashwamedha Viraat Diksha.

When the hardened disciple becomes ready, when he prepares to face the fires of the world, he doesn’t get vanquished, because the Guru Himself protects him. Guru makes him pass through this arduous struggle to terminate his deficiencies, and make him pure-perfect. He becomes pure like the gold itself, all of his deficiencies and inadequacies disappear.

This Ashwamedha Diksha initiated divine power within ourselves to counter the struggles.

The platform of this struggle is very amazing. The entire old edifice of the disciple gets shaken. However, Guru gives him full care. The worldly relations don’t terminate, but he finds his freedom within this web of worldly relations. Then Guru transmits the Soul Shakti Element into him. This Soul Life Transmission process is termed as “Tatvamasi Process. The basic soul-Praana within each organism and Sadhak is covered with layers of darkness and defects of various lives. The dark layers of memory, hope, attachment, enmity, strength, pride, ego envelops the inner Soul-Prana element – Tatvamasi. Then SadGuru clears the Prana-element within the disciple with His own process. He motivates him to comprehend his own soul-prana element, whose root essence is –

I am … I am … I am the element … the activation of our inner Ashwamedha Yagya, the inner Sun, the inner Royal Rajas element is the Tatvamasi Process.

Gurudev granted this process through Diksha on December 27, 2015 at the holy site of Arogyadhaam.

This action was taken to liberate the disciple, wherein the disciple full of Self-joy, Self-expression and Self-perfection dynamically moves ahead towards “Poornamada Poornamidam…” process.

Today every disciple is proud of himself, he himself knows that there are unique goals in his life, and SadGurudev has setup that uniqueness within Him.

SadGuru brings such an elevated disciple into His own level. The disciple transforms from a low-level into an elevated personality. He gains understanding of all mysteries of his life. His goal is forever visible to him. His definite steps start moving dynamically with full determination towards that direction.

Then the Diksha initiation provided by Guru to him at that stage is, Samraatabhishek Diksha.

I do not want to say anything specific about the Samraatabhishek Diksha. But you ought to travel back in time to 1997 when SadGurudev explained the basic elements of Samraatabhishek.

Which element contains completeness of life? That specific element is the human life itself. The life, which is neither separate nor an obstacle towards his ultimate goal. Therefore the ultimate goal of Moksha-liberation as mentioned in the holy scriptures is incomplete until it imbibes the glory of life. The life is not limited to a few years between the birth and death. The calculation of life is a completely different concept, it is a continuous movement, outside the limits of time and death.

However a real person is the one, who sees with a complete vision. One who accepts the factual truth. Growth of such unique perspective enables the person to develop a detached vision of life. Only then does the person attain capability to hear the sweet song of life as a Sadhak with his faltering, dynamic steps.

The initial Diksha-initiation by Guru brings the disciple to this stage. It starts to eliminate his lassitude, and initiates him on the path of detachedness.

None of the various forms of Bhoga-indulgence are despicable or worthless. The human brain has composed refined definitions. The real perfection and success of Bhoga-Indulgence occurs only when it is assimilated with Moksha-salvation.

We can think of Moksha-Salvation as a cool day full of pleasant sun-rays, and Bhoga-indulgence as a full-moon night full of infinite stars. Both are uniquely special in their own might. The merger of such a day and night is  the holy time of Godhuli-evening, which has been considered as the most pious and auspicious moment in the Indian philosophy. The essence of Dharma-religion is to imbibe such assimilating moment in the human life, this is basic foundation of the Tantra as well.

The Great Beneficence from Guru

The termination of person’s own efforts, heralds the beginning of Guru in the person’s life. The process of Guru grace starts when the person realises after his own self-analysis that he will not be able to achieve anything with just his own efforts (within both spiritual and material spheres of life), and concedes defeat.

The term defeat is not used here in any derogatory sense, rather it is the first step towards the dedication. This is the initial mental frame of dedication. There is no benefit in granting Diksha in absence of dedication. The process of Guru starts only after initiation of  dedication by the disciple, and this process is instrumental in building the bridge around the two shores of the human life.

The journey from self to Samraat (Emperor) –

The Guru always wants His disciple to achieve the first position, to be the best. Guru always desires His disciple to obtain perfection in all spheres of life. He wishes His disciple to reach an elevated, distinguished state both in spiritual and material spheres. He wants His disciple to attain a distinct identity instead of living a normal, anonymous life. Only such distinguished personalities can be honored with the title of Samraat or the emperor. A samraat (emperor-monarch) in this age neither means a horse-riding fighter carrying swords-sheaths and conquering multiple countries, nor can it refer to a person sitting on a golden throne enjoying the dance in his court. Such pictures are misleading.

The indulgence and life are two different concepts, and similarly the Samraat (emperor) and spirituality are two completely different concepts.  Every Diksha initiation is essentially a spiritual exercise, because the flow of human life is from materialism towards spiritualism. This is the basic essence of the Samraatabhishek Diksha.

Only one who has achieved victory-success in all walks of life, is entitled to be conferred the title of the Samraat-Emperor. History is full of multiple heroes, who, though born in normal family, governed millions of hearts through their actions, without using any sword or weapons. Such personalities are highly blessed, whose descendants proudly honour them. The literal meaning of Samraat-Emperor is a king, who has successfully accomplished the Rajasuya Ashwamedha Yagya. This Rajasuya Yagya-sacrifice is not limited to royal activities, rather it concerns the inner mind of each person.

The human mind is like a horse, which we have freed up with a dream to conquer multiple states in the battle of our life. This state can mean material-wealth or destruction-of-enemies. It can either mean political success or obtaining an honourable position. Is obtaining the material-luxuries in life a less cumbersome task than conquering countries. Each one of us has been performing the Rajasuya Ashwamedha Yagya for material success. There is nothing wrong in it. Our Sages would not have listed out one hundred and eight kinds of Lakshmi if it was wrong. However, the sad aspect is that the horse of our mind gets captured-confined in one state or the other in this race to win, leading to an incomplete dream. There is nothing more painful than an unfulfilled dream, because the human life is not meant to just eat and die. It is also not a good idea to let loose the horse of human mind in spiritual sphere, because this horse will get captured-confined in some miracle or siddhi-accomplishment state. The main goal is the balance between indulgence and salvation.

To state simply, the “Samraatabhishek Diksha-initiation” creates a bridge for uninterrupted progress in indulgence and salvation. It provides capability to move freely, and such liberated persons can only move towards enlightenment. It is the Yagya-sacrifice of life. The Samraatabhishek Diksha is the next stage of the Yagya, which was setup by the Rajyabhishek Diksha.

It is our fortune that Pujya Gurudev is blessing us with Samraatabhishek MaahDiksha Shaktipaat initiation at Arogyadhaam, Delhi this year.

Our life is blessed that we met SadGurudev in this life. We took steps on the journey, in which Guru is with us at each and every moment.

All of us should come to the divine ground of Arogyadhaam, Delhi. Guru is pouring a fountain of divine nectar of joy, we will make our life divine through this holy nectar of joy.