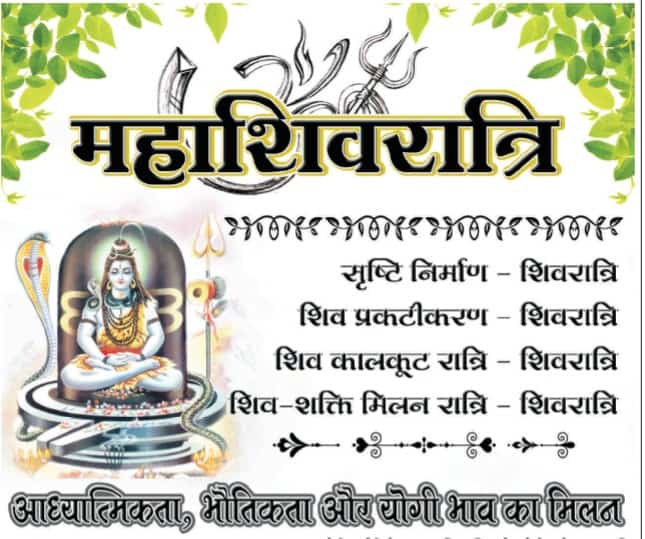 Description and significance of Shivraatri as illustrated in the Puranas

The Puranas contain many different stories about Mahashivraatri. The main story goes like this – Lord Shiva is the Parabrahma Himself. The Creation stemmed from His imagination. Darkness ruled all corners of the universe before onset of the creation. Then Lord Shiva envisaged the Creation,  created the universe,  formed the Holy Trinity of Gods and initiated the creation. It is considered that during the manifestation of the Creation, Lord Parabrahma Shiva incarnated in the form of Rudra from Brahma on this day and that the entire universe was destroyed during Tandav dance through opening of  the third eye during the apocalypse on this day.  Thus it was termed as Mahashivraatri or Kaalraatri.

And when Lord Shiva dissolves the creation at the end of eon, then only the darkness remains. On one  such occasion (when the whole creation was immersed in darkness), Goddess Parvati performed Sadhana of Lord Shiva with full devotion. Lord Shiva got pleased and blessed Parvati. Parvati asked Mahadeva for a boon to get pleased and fulfill all desires of anyone who performs His Sadhana on such a day.  Thus Shivraatri  started with the boon of Goddess Parvati.

Another story states that – Once a dispute arose between Lord Brahma and Lord Vishnu about who was more superior. Then Lord Shiva appeared towards Them in the form of a light column (Linga). Brahma and Vishnu started to explore the starting and terminating points of that column. However, who could comprehend the mysteries of Mahadeva? One  who is  the God of the Gods, one who is totally limitless and is completely detached from the concepts of the beginning and the end. When Brahma uttered a lie, Lord Shiva got furious and cut off His fifth head. Vishnu started reciting prayers to Lord Shiva to restore calm,  and Lord Shiva got pleased with Him. From then onwards, the  Mahashivraatri festival is  celebrated to in the form of prayer to Lord Shiva.

Another tale from Purana states that – Kaalketu poison emerged from the divine ocean during the churning of the ocean.  Lord Shiva consumed the entire toxin to protect the world and, therefore He is also called as Neelkanth. This occasion is celebrated as Mahashivraatri.

The nature of Lord Shiva is very simple. He loves nature  very much and gets delighted upon receiving the abundant flora present in  nature. On the night of Maha-Shivraatri, Lord Sadashiv gently accepts all offerings of the Bilwa-Patra, water, Dhatura, Lotus flower etc.

Lord Shiva’s regular-normal worship requires no specific material.  It is possible to delight Lord Shiva by offering just water and Bilwa-Patra on the Shivling.  The Shivraatri festival is very popular among the masses due to the gentle nature of Lord Shiva.

The moon reaches a very degraded state on the Thirteenth or Fourteenth date of the  Maha-Shivraatri. The Moon becomes totally powerless and is unable to emit energy to the universe. The moon is causative planet of the mind, and therefore the thoughts in our mind also waxes and wanes like the phases of the moon. A person’s mind sometimes turns to sadness  surrounded among the mental difficulties. Similarly it becomes very enthusiastic and joyful at the other instant. Moon enhances the grace of Lord Shiva’s forehead. Therefore any person desirous of achieving control over own mind, or wishful of enhanced focus-concentration, should definitely perform Sadhana of Lord Shiva.

Generally it is possible to lead a happy detached life like Lord Shiva, who holds the Kaalkut poison of the creation within His neck; by worshipping Lord Shiva on Pradosh-Shivraatri every month. One can lead a happy joyful life in this world surrounded by the poisonous-toxic world through divine blessings of Lord Shiva.

The Sun God also reaches the Uttaraayan by Maha-Shivraatri. This is also a time of changing season, which is also considered sacred. This is the moment of onset of the spring season. The mind gets filled with joy and enthusiasm at the arrival of the spring.  Cupid also develops during these moments.

Therefore, by worshiping Lord Shiva on the occasion of Maha-Shivraatri, one can curb the negative-frustrated sentiments of the mind, though upward-positive movement of the cupid. This is most opportune time to establish control over cupid by worshipping Lord Shiva.

The worship-Sadhana on Maha-Shivraatri can take a Sadhak to the highest pinnacles of the spirituality, if he sets up correct compatibility with the mother nature on this day.

A powerful energy flow develops on Maha-Shivraatri, which can even grant the third spiritual eye akin to Lord Shiva’s.

The positive environment in the northern hemisphere of the earth on this night drives up the positive energy of the human body. The nature pushes the man towards his spiritual peak on this day. We celebrate Maha-Shivraatri to enhance our association with nature.  The basic reason to worship during  the whole night of Maha-Shivraatri is to enable this natural upward flow of the energy. The Sadhak should keep his spinal-cord completely erect during the entire night of Maha-Shivraatri and should perform Sadhana-worship of Lord Shiva with full focus and consciousness.

The Maha-Shivraatri is highly significant both for Spiritual aspirants, as well as for those who are leading domestic householder family life.

Our sages and mystics recognized the significance, and so they used this occasion as the Sadhana day. It became a part f the tradition to accelerate the spiritual progress. Moreover, Lord Shiva is always described in His Trayambak form, one who has three eyes. The third eye is the eye for  self-realization. The two physical eyes can show all incidents within the physical material world, but they cannot show the truth beyond the  bounds of sight. However Lord Shiva possesses a third eye, which can penetrate quite deeply, to discover the eternal truth.

The Sadhak should not lie in the parallel or horizontal position during the divine night of Maha-Shivraatri, i.e. these golden moments should not be wasted in sleep. The Sadhak should sit fully erect and perform Sadhana-worship of Lord Shiva with full focus-concentration. He should rise from his normal state to attain the Shiva state.

The literal meaning of “Shiva” is “That what is not”. Let your self lose itself on Maha-Shivraatri. This will open up a new possibility of a novel vision in the life, and you will be able to see life as it really is.

The spiritual path of the Sadhaks is generally  considered to be very tough and difficult. There is a high dread of wondering away on this unknown path. The  physical, psychological and spiritual limitations of the Sadhaks also pose a great challenge. The fear of straying away from the target-goals during the difficult Sadhana situations is also very real.

However the guidance and company of Sadguru enables a Sadhak to complete this difficult spiritual journey with ease and comfort.  The Sadhak desirous of ultimate realization considers every natural process or opportunity as a specific stage of his divine  journey. This elevates his spiritual level and brings him closer to the Ultimate. Maha-Shivraatri is one such divine opportunity.

Maha-Shivraatri is directly related to Lord Shiva, who is not only the Ultimate-Yogi, but is also the  Ultimate-source of the  supernatural bliss. It is important to comprehend Lord Shiva, to realize the significance of Maha-Shivraatri.

Maha-Shivraatri is very important for those people who are progressing on the spiritual path. Lord Shiva is not worshipped as God in the Yoga tradition, rather He is considered as the Ultimate-Guru.

He is the first prime Guru to grant knowledge. Maha-Shivraatri is the day on which He attained perfect calm after meditating for thousands of years. All dynamism stopped and He became totally still. Thus the ascetics celebrate Maha-Shivraatri as the occasion of attaining stillness and calm-peace.

This day-night is considered very important In Yoga tradition because Maha-Shivraatri presents many possibilities-opportunities to an inquisitive curious ascetic. Even the modern science, after passing through multiple stages, has reached a state of quest to prove that Energy is the core of all matter, and that this Energy expresses itself in billions of forms.

Rendezvous with the Infinity

A Yogi is the one who has understood the  unity of existence. Yoga does not mean any special practice or method.  Yoga is the culmination of all efforts to comprehend the infinite,  a combination of multiple trials to understand the unity of existence. The night of Maha-Shivraatri grants us an opportunity to experience this Divinity.

On the divine occasion of Shivraatri, we should achieve a state where we cease to exist as we are. Shiva means – “That  What is Not”. This is the night to terminate the self, i.e. to extinguish our ego. The termination of ego opens up the possibilities of a new vision. It provides us an opportunity to view life from a more clear and balanced perspective. Such a life cannot be distorted.