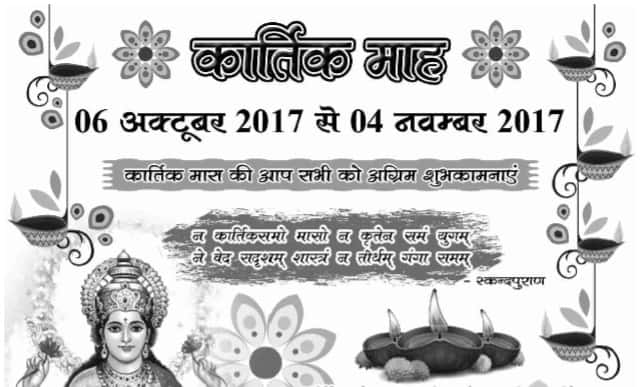 Best wishes to all of you for the Kartik month

The Kartik month has the highest religious significance out of the twelve months of the year. Many important festivals like Karva Chouth, Ahoi Ashtami, Tulsi Ekadashi, Dhan Trayodashi, Deepawali, Govardhan Pooja, Bhaidooj, Dala Chhatt, Akshaya Navami, Devauthani Ekadashi, Tulsi Vivah, Kartik Poornima etc. occur during the Kartik month. The Kartik month starts from the night of the Sharad Poornima. It is said that Lord Krishna performed Rasa-Leela with the Gopis on the night of the Sharad Poornima. Nectar would have certainly rained from the Moon that night. The tradition continues to this day. Even now, Kheer is left to bathe in the moon-light, to transform into the divine elixir.

The Month of Attaining Wealth

The month of Kartik is the month to obtain health and wealth. This month is also very dear to Lord Vishnu and Goddess Mother Lakshmi. According to the scriptures, Lord Vishnu incarnated in the Fish form in this month. Mother Lakshmi starts questioning the householders and ascetics from the night of Sharad Poornima – “Ko Jaag Ri?”, or “Who is awake?” Who has renounced the inertia, procrastination, laziness and ignorance?

The Kartik month is also called as the month of Mother Lakshmi, because Goddess Lakshmi roams on the earth in this month and bestows invincibility-protection to Her Sadhaks. No other month is as appropriate as the Kartik month for the Lakshmi Sadhana, and the Sadhak should perform as many Sadhanas as possible during this month.

The Month of Religion

Tulsi worship is of particular importance in the Kartik month. Lord Krishna Himself worships Tulsi during this month through the following Mantra –

It is believed that every devotee who worships Tulsi on Sharad Poornima earns the capability to go to Vrindavan. One should light a lamp to Tulsi on mornings and evenings during this month.

In the Padma Poorana, the interaction between Shree Krishna and Satyabhama reveals the wonderful glory of the Deepdaan. It is said that Deepdaan bestows better fruits compared to even Ashwamedha Yagya. Shree Vishnu takes rest in Ksheer-sagar on the Shukla Paksh Ekadashi of Aashaad month, and He is woken up after four months at the entry of Sun into the Tula (Libra) constellation. This day is termed as Devotthaani Ekadashi (Deva Uthani Ekadashi). The devotee sends wake-up message to His Lord during the Kartik month through Deepdaan.

Another perspective is, as the winter approaches, the nights start getting longer and more darker. This enhances the significance of Deepdaan. There is a special advantage in bathing before sunrise. Anyway, when Mahalaxmi is questioning that, Who is awake? Those who are alert-conscious have to certainly get up because the bathing-meditation is mandatory in the morning.

According to Padma Purana, those who worship Lord Vishnu through Dhoop (Incense) and Deep (Lamp) regularly during Kartik month after bathing before sunrise, they become very  dear to Lord Vishnu.

Kartik month has also been termed as the month of health. While hundreds of different kinds of diseases torment us during the rainy season, the rays of Sun and Moon cast a positive effect on our health during the Kartik month. This transmits joy into the mind and intellect of the men and women.

How to make Chanchala Lakshmi stationary?

This question has been asked by the householders over the centuries. This adjective of Chanchala (always on the move) associated with Lakshmi gives rise to fear. Will this wealth remain with us tomorrow or not? The fearful mind starts guarding this wealth. However, can anyone stop Lakshmi if She has decided to move away? Actually, the principle of stabilizing Lakshmi is clearly described in the scriptures.

Mother Lakshmi resides wherever Truth is present, where actions occur in accordance with the religion, where fasting and charitable-donations occur, where Guru is revered, where women are respected, where weak people are protected and ego is kept at an arm’s length. Mother Lakshmi has special love with cleanliness, and this started the tradition of cleaning the house at Deepawali. This cleanliness of your body, your mind and your home should be permanent to make Lakshmi stable. You are well aware of how to maintain cleanliness of the physical body and of your house.

The mind should be pure and unblemished to be cleansed. It should have a sense of goodwill, rituals and harmony. You will not be able to prevent departure of Lakshmi in absence of any of these qualities. Even Lanka, the city of gold, owned by Ravana, the master of Tantra got burnt to ashes, upon entry of malice and ego into his mind.

The common people consider “wealth” as the meaning of Lakshmi. Wealth is an expression of Lakshmi, but this is not Her complete form. Have you ever thought why nobody names their children as Kansa, Jaraasangha, Ravan or Suparnakha? All of them hailed from royal families and were extremely rich. We do not name our children after them because all of them were “Shree-vihin” (without-Shree). They had wealth but they lacked righteousness.  One can earn wealth by robbery and theft also, but  tears and dreadful sighs accompany such wealth. Therefore, the path of Mother Lakshmi is the path of duty, it is the path towards  performing our duties and it goes through righteous religion.

May Almighty Lakshmi, in Her eternal grace, inspire us towards righteous good deeds; this should be our prayer to Mother Bhagwati Lakshmi

What is the biggest problem with money? Desires, whatever wishes arise in the mind, the money becomes insufficient to fulfill them. Now having desires is fully justified and the paucity of wealth creates a quandary about how to remove this lack of money? The path in front is called Karma and when you tread on that Karma path of action, then the fears-apprehensions within your mind automatically vanish. We get into hundreds of questions and apprehensions in life, because we are afraid to take the initiative of taking the first step. Our habit of letting others take the initiative, makes us miss the golden opportunity. Therefore you should make a note to always –

Need to talk to someone – Phone them

The one treading the path of duty always receives divine blessings of Mahalakshmi.