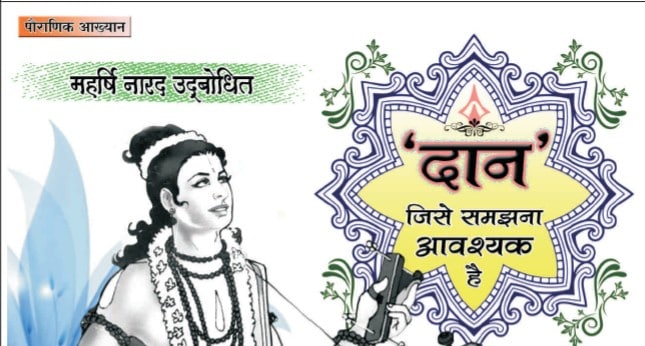 Mandatory to understand its intricacies

King Dharmaverma did penance for multiple years with a desire to understand the intricate elements of the “Charity”. The Heavens were pleased with his austerity and proclaimed –

The Heavens became silent after uttering this single Shloka, and did not respond to multiple entreaties of King Dharmaverma for the explanations.

In order to understand the meaning of this verse, King Dharmaverma proclaimed throughout his kingdom a prize of seven lakh cows, gold coins and seven villages to the interpreter of this verse. Many Brahmins tried but could not properly interpret this verse.

Sage Naradji also heard this proclamation, he was searching for land to build an ashram at that time. He wished to build the ashram only on self-acquired land. Naradji decided to earn the land, and reached King Dharmaverma’s court dressed as an old Brahmin to explain the above-mentioned verse.

King Dharmaverma politely questioned Narada that – What are the two reasons, kinds and results of the donation? Kindly explain the meaning of the Shloka-verse.

Naradji explained the verses as follows –

Less or more quantity of donation is not a measure of greatness of donation, rather “Reverence” and “Power” decide the increment or decrement of charity. In absence of any Reverence-feelings, if someone donates his entire possessions, his own life itself, even then he does not get its results, therefore the charitable donation should always be made with full reverence and faith.

It has been said about power that – Whatever is more (excessive) than the required quantity for nourishment of the family, only that wealth is worth donating, and is as virtuous as honey; while anything on the contrary is like a poison. Making charitable-donation to a happy and capable person while introducing sorrow-sadness to his own family-soulmate, is akin to consuming poison instead of honey. It does not conform to religious “Dharma”, rather it is just the opposite.

If one donates out money which was kept in safekeeping on behalf of someone else, then it is termed as “Anvaahit“. Money left with someone on trust is termed as “Nikshipt“. Donating all the possessions, in-spite of presence of  descendants, is termed as “Saanyaaya Sarvasawa Daan“.

A wise man should not never donate any of the above nine types of items, as this constitutes a major sin.

There are six qualities of charitable-donations – religious (Dharma), wealth (Artha), desire-temptation (Kaam), embarrassment (Lajja), joy (Harsh) and fear (Bhaya). The donation gifted to the eligible persons, in holy pious spirit without any expectation or desire in return, is termed as “Dharma Daan“.

Anything gifted in a particular context with a specific purpose-desire is termed as “Artha Daan”. It bestows fruits in this life itself.

Anything gifted to ineligible persons, in the context of womanizing, drinking, hunting or gambling, with some efforts, is termed as “Kaam Daan“.

Whatever is gifted out of embarrassment due to request-appeals made in a gathering, is termed as “Lajja Daan“.

Anything gifted to unsuitable persons out of fear of disgrace, slander or violence is termed as “Bhaya Daan“.

The donor should be healthy, religious, willing to donate, free from any addiction, holy, one who earns without any improper means. A “donor” with such six qualities is always admired.

A donor without any simplicity, devoid of faith, sinner, addict, promise-breaker, and long sleeper is termed as a “Tamoguni and Adham“. One who has a bright family, education and ethics, who leads life in a “Pure and Saatvik” manner, only such a Brahmin is termed as the most eligible receiver.

Attributes like pleasant, smiling countenance, a warm heart full of love, respect to the receivers, ignoring their deficiencies, all of these virtues bring Purity into the charity-donation.

The money which has not been earned by harassing anyone, i.e., money earned through the hard work of self, through own endeavours without any frustrations, whether it is little or more, is considered as the most appropriate object.

Any object that is gifted to someone with a religious purpose is called ‘Dharmayukt Daan“. If the donating-object is devoid of the above attributes, then one earns no fruits-virtues through donation.

The rare items for a place or time, which are suitable for donation, only that “Desh and Kaal” is appropriate. Thus the six parts of the charity-donation have been described.

Now listen to the description of two fruits-virtues of charity –

The saints have described two results-virtues of charitable-donations. One is for the “Parlok” (next life) and other is for “Ihalok” (current life). The fruits of whatever is gifted to excellent suitable-receiver are consumed in the next life, and of whatever is gifted to unsuitable-receivers are consumed in the current life. These are the two results-virtues of the donations.

The three modes of charity-donation destruction –

If one repents after making donation, if the donation is made to an unsuitable person or if the donation is offered without reverence – that charity is destroyed. These three destroy charity – “Repentance, Unsuitability and Irreverence”

Rajan! Thus I have explained the great foundation-basis of charity-donations wrapped within seven parts to you.

Raja Dharmaverma answered – Today I have succeeded in my birth. I have received the reward of my penance today. If a person loses his moral character even after receiving high level of education, then his entire life is meaningless. A wife gained by enduring great trouble is worthless if she turns out to be shrew. A well dug with great efforts-exertions is useless if its water turns out to be salty. Similarly a human life obtained after multiple travails is meaningless if it is spend immorally. My penance-austerity would have gone in vain. You have made it successful. I pay homage to you.

In this way, Raja Dharmaverma offered many other valuable-ornaments along with the gifts already declared to Naradaji. Thus Sage Narad completed his resolve to make his own ashram, and the ashram turned out to be a glorious institute to expand the education-knowledge of the students of the state.