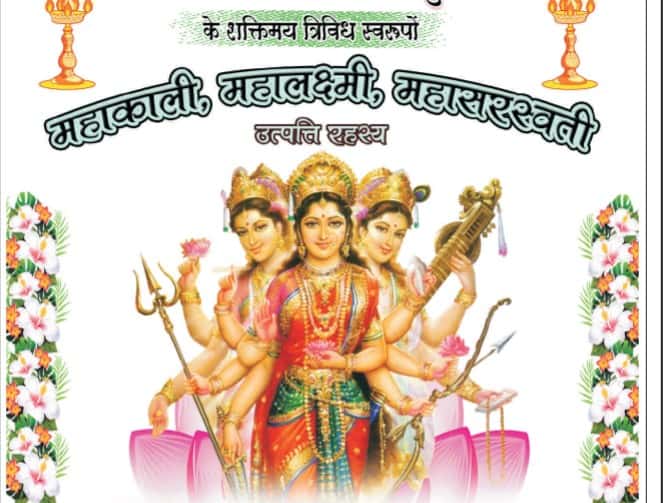 The Secret of Origin

Mahakali, Mahalakshmi, Mahasaraswati – These three names symbolize the ultimate divine Trinity of Supreme Shakti power. The scriptures  firmly believe that God has to take an avatar in His self-created creation  in the form of either man or woman using His supreme supernatural powers to protect values and morality. The world reverentially glorifies Them as Brahma, Vishnu and Mahesh in the masculine form, and as Mahakali, Mahalakshmi and Mahasaraswati in the feminine form.

The primary Tama  Rudra-form of supreme Shakti power is Mahakali, who primarily destroys the wicked.

The primary  Sattva Vaishnavi form of supreme Shakti power is  Mahalakshmi, who nurtures the universe.

The primary  Raja Brahmi-shakti form of supreme Shakti power is  Saraswati, who creates the universe and imparts knowledge-wisdom.

The Durga Saptashati narrates the tale of origin of these three supreme powers as follows:

In an ancient age of first era of Swarochisha, Emperor Surath ruled over a vast kingdom. Once he got badly defeated by his enemies in his own kingdom. He got depressed, and went to the forest on the pretext of a hunt. He started living in the hermitage of Sage Medha. However he did not find peace and was always worried about his kingdom and treasury. Once he chanced upon a Vaishya while wondering around the hermitage. The Vaishya seemed depressed and sad, and the king enquired – “Who are you and why have you come here?  Why is your face full of sadness and anxieties?”

The Vaishya replied politely that – “My name is Samadhi. I was born in a highly prosperous family, but unfortunately my evil sons have seized my wealth and have drove me out to wonder in the forest. Inspite of their cruel deed, I am unable to eradicate my attachment to my vile sons.”

They reached the hermitage of Sage Medha while discussing these topics, and the King questioned the sage – “What is the reason that I am still attached to my kingdom, even though I have been driven out of it. Similarly, this Vaishya continues to be attached to his evil progeny. Kindly guide us how to get riddance from this anxiety.”

The Sage replied – ” O King! All the living beings are wrapped in a maze of attachment and bonds, through the strange workings of the grand illusion (Mahamaya) –

The grand illusion of Lord Vishnu attracts and fascinates the entire creation. This grand illusion Mahamaya Goddess strongly captivates and tempts even the powerful stable minds of wise sages and hermits. This Goddess has composed this entire universe. She is the sole controller of bondages within this world, and She provides liberation only to those who please Her.

The King enquired – “My Lord! Who is this Mahamaya Goddess whom you just described, and how was She created? Please provide more detailed information about Her quality-attributes, actions, powers and form.”

The Sage replied – “She is the Nitya, a personification of the universe itself. The entire creation is Her form, and She drives this entire universe. Yet, when She personifies to perform divine actions, we consider Her as being created.”

Origin of the Mahakali

Lord Vishnu was sleeping in Yoga-Nidra on the Sheish-bed after the submergence of entire world upon Armageddon. At that instant, two dark monsters, Madhu and Keitabh, who were born from ear-worms of the Lord, decided  to destroy Lord Brahma. Prajapati Brahma, situated in the navel lotus of the God, prayed with full concentration to the Lotus-Eyed Divine Yoga-Slumber of the  God to awaken Him.

“O Goddess! You only are the Creator, Preserver and Destroyer of this entire universe. You are the Mahavidhya, Mahamaya, Mahamedha, Mahasmriti and Mahamohaswaroopa. You yourself are the Daarun Kaalraatri, Maharaatri and Moharaatri. You have caused even Lord Vishnu, the creator, preserver and destroyer of the universe, to go into the deep Yoga-slumber. You have influenced Lord Vishnu, Shankar and Myself (Brahma) to attain a personal-form. O Goddess! I beseech you to please awaken Lord with your influence. ”

After this prayer, Goddess Mahamaya Bhagwati emerged from the eyes, face, nostrils, arms and heart of Lord Vishnu. Lord Vishnu also got up and noticed that two ferocious monsters were getting ready to eat Brahma. God Himself started to fight them to protect Brahma. He was unable to vanquish the monsters even after fighting for five thousand years. Then Mahamaya captivated the minds of those monsters, and they proudly boasted to Lord Vishnu – “We are very pleased with your style of fighting. Ask for a boon.” Lord Vishnu requested them to grant Him a boon to destroy both of them. Madhu-Keitabh agreed and recommended – ” Do not try of kill us where the land is covered with water.” Finally Lord Vishnu killed them with His Chakra after placing their heads on His thighs. Thus the ever-powerful Sacchidanand form Goddess attained Mahakali form to accomplish the Divine mission.

Once a ferocious war raged between  the gods and demons for a hundred years. The King of the gods was Indra and Mahishasur was of the demons. The mighty demons finally defeated the gods and Mahishasur himself assumed the position of Indra. All the gods, led by Lord Brahma, went to Lord Vishnu and Lord Shankar, and narrated their tale of misfortune. Both Lord Vishnu and Lord Shankar got incensed with fury after listening to their heart-wrenching tale. A powerful light emanated from Their forms, resplendent in all directions, and assumed a female form. All the gods were glad to see that Goddess and offered their arms-armaments. This pleased the Goddess. The sound of Her laughter echoed in all the directions, the sea began to sprout, the earth trembled and the mountains started to wobble. The gods and the sages started to pray and sing Her glories.

The terrible roar angered Mahishasur and he came along with a well equipped-armed army of the demon-monsters. A fierce battle ensued between the demons and the Goddess, in which all demons-monsters got killed. Mahishashur also ran out of his illusory tricks and was finally killed by the

Goddess Mahalakshmi. The gods praised Her glory in a variety of ways.

Once upon a time, in the ancient ages,  Shumbha and Nishumbha snatched away all rights of the gods and started to consume the holy sacrificial offerings themselveṣ. The gods went to the Himalayas to pray to Goddess Mother for restoration of their rights. Holy Mother Parvati appeared and Shivaa form emerged from Her. Since Goddess Saraswati had emerged from Mother Parvati’s form, so She was also known as Kaushiki. Mother Parvati’s body turned dark after this event, and therefore She is also known as Kaalika.

Thereafter Goddess Kaushiki was once sitting in a very beautiful-resplendent form, when Chand-Mund, the messengers of  Shumbh-Nishumbh noticed Her. They praised Her beauty to Shumb-Nishumbh – “Oh King of Demons, a highly adorable lovely beauty is seated on yonder Himalayas. No-one has ever seen such an endearing form. You own Airavat elephant, Paarijaat tree, UccheHShrvaa stallion, Brahma’s plane, Kuber’s treasure, Varun’s golden umbrella, and various other wonderful gems; but your invaluable collection is incomplete without such an adorable lady. Therefore, you should possess her.”

Listening to these statements of their messengers, Shumbh-Nishumbh commanded one of their angels – Sugreeva to please Her and bring Her to them. The angel conveyed their message to the  Goddess and praised their greatness. The Goddess replied that she understands their message, but she is bound by a vow which she had made earlier –

“Whomsoever crushes my pride by conquering me in a battle, will be my spouse”. So you go and convey my pledge to your master that he can wed me only after winning me over in the battle-field. The angel tried to convince and explain to the Goddess in many different ways, but the Goddess did not relent.

The enraged angel recounted the entire sequence of the events to Shumbh-Nishumbh. The infuriated kings sent their general Dhoomralochan to fight with the Goddess. However, the Goddess killed him within a few moments with his army. Similarly She also vanquished and killed Chand and Mund in same fashion. The furious kings surrounded the Goddess with their entire army.

Mother Goddess sounded the bell, which reverberated across all directions. The power-Shaktis emerged from Gods like Brahma, Vishnu, Mahesh, Kartikeya et al, and came to Chandika. All these Shaktis were equipped with the arms-armaments-vehicles appropriate to the respective God-Goddess. Lord Mahadev Himself emerged within this circle and requested the Goddess to please Him by destroying all the demons-monsters. An extremely strong power-Shakti emerged from the Goddess, and requested Lord Shiva to act as Her messenger and convey a message  to the demons to surrender the kingdom of three realms to Indra, and thereby relocate in future to the Paataal-realm.

Lord Shiva conveyed the message of the Goddess to Shumbh-Nishumbha, but they did not pay any heed to it. A fierce battles ensued. The power-Shaktis started to destroy the demon-army. Then, an infuriated Raktbeeja joined the battle. The collection of demons generated from his blood filled up the battle-site, which trembled the gods. Then Chandika told Kali to expand her mouth to drink the blood falling from these demons. This demon would be vanquished upon reduction of his blood.

Thereafter, Mother Goddess hit Raktbeeja with a spear. Mother Kali kept on drinking the blood coming out of Raktbeeja. He became weak and was killed upon reduction of his blood. Shumbh and Nishumbh also were killed on the battlefield. The gods starting singing praises and glories with joy.

The gods praised glory of Mahasaraswati Goddess – “O Goddess! You are the eternal absolute powerful Vaishnavi Shakti-power. You are the core Mahaamaya Shakti of the universe. You fascinate the entire world. You liberate your devotees. O Goddess, all the knowledges sprout from within you, and you are the origin of the feminine nature. You drive the entire universe. Words are not enough to describe your qualities. O Goddess, may you be pleased, and save us from our foes. Please destroy the results of all sinful actions in the universe!” The Goddess got pleased with the Gods and stated – “O ye Gods! Whomsoever prays with full focus-concentration to me with the praises sung by you, will get salvation from all kinds of troubles and problems.” Then the  Goddess retreated.

Sage Medha recited the worship done by the gods, and suggested – “O King! You, this Vaishya and all wise people are getting trapped in the illusory fascination created by the Mahamaya Goddess. Therefore, you should pray and surrender yourself unto Her. She grants pleasures, heaven and salvation to all those who worship Her”. Both of them went to the river bank, and creating a statue of the Goddess, started the worship, as guided by the wise Sage. They performed rigorous penance for three years and endured multiple austerities, whilest following all rules-regulations. Goddess got pleased with their worship, and manifesting towards them – “I am pleased with your austerities. What boon do you wish for.” Then the king requested for his kingdom and the Vaishya for knowledge-wisdom. The Goddess granted them the boon and both succeeded in their endeavors. The Vaishya achieved salvation and the king attained his kingdom. He took rebirth as son of Sun-God and became Saarvarnimanu.